This February, we’re honoring Black History Month by celebrating Black individuals and organizations that make a difference in the outdoors. These leaders include scientists, rock climbers, ultra-runners, cowboys, and more. Check out the leaders below!

John Francis “Planetwalker” is an environmentalist and author.

In 1971, he watched oil spill into the San Francisco Bay, and was so disconcerted that he swore off all motorized transportation. For the next 22 years, Francis walked everywhere, raising awareness about the importance of the environment. This earned him the nickname “Planetwalker.”

Francis got frustrated when his words didn’t make enough difference, so he also took a vow of silence for 17 years!

He ended his vow of silence in 1990 on Earth Day, and also earned a PhD in land management.

Today, Francis continues his work as an advocate for the environment.

Mirna Valerio is an ultrarunner (someone who competes in races longer than 26.2 miles!), author, and speaker. In 2015, Valerio started a blog called “Fat Girl Running” to talk about her experiences as a larger Black distance runner–a sport which is full of mostly white, thin participants.

Then, in 2017, her book, A Beautiful Work in Progress, was published. Valerio speaks to people across the US about diversity, equity, and inclusion in the outdoors and fitness. She enjoys helping people feel that they are welcome in the outdoors, in running.

Kai Lightner is a champion climber who’s only 21!

When he wouldn’t stop climbing the furniture, Kai’s mother took him to a climbing gym when he was 6. Kai hasn’t stopped climbing since. He started competing in USA Climbing competitions that same year.

Outdoor Afro is an organization that “celebrates and inspires Black connections and leadership in nature.”

Founder Rue Mapp began Outdoor Afro as a blog in 2009, and it grew through her grassroots organization to gain national recognition, chapters, and sponsorship.

Right now, the closest leaders to Kansas City are in St. Louis, so if you are interested in being a leader for Outdoor Afro, apply today!

Charles Young was the first Black man to become a national park superintendent. Young was born into slavery in 1864. His father escaped enslavement and joined the Union army, and the family became free, living in Ohio.

As a young man, Young became one of the first African Americans to attend West Point, and spent 28 years serving in the US Army, mostly with Black troops nicknamed the “Buffalo Soldiers”.

After his service, Young was appointed national park superintendent at Sequoia and General Grant national parks. He was responsible for “protecting the land from poachers and timber thieves and managing road construction.”

Along with the park rangers, Young improved access to the parks, creating two new entrances for wagons.

The National Brotherhood of Skiers was launched in 1973 by Ben Finley and Art Clay with a mission to get more Black people into skiing and other winter sports.

Since its founding, the organization has grown to incorporate over 55 Black ski clubs with over 3,500 members–making it the largest Ski and Snowsports organization in the United States.

The group also hosts a biennial ski summit, and trained both Black Olympians and Paralympians. In 2019, founders Ben Finley and Art Clay were the first Black men to be inducted into the Ski and Snowboard Hall of Fame, and REI produced a short film about the Brotherhood.

Nat Love was a cowboy and author.

Though he was born into slavery in 1854 in Tennessee, Love managed to not only learn the skills of a cowboy, but to read and write (which was illegal at the time).

After gaining his freedom, Love moved to Dodge City, KS to find work as a cowboy. He was just 15 years old! In his memoir, Love described Dodge City as having “saloons, dance halls, and gambling houses, and very little of anything else.” Love also enjoyed “dare-devil riding, shooting, roping and such sports,” and he gained the nickname “Deadwood Dick” after winning a shooting contest in Deadwood City.

Love was a successful cowboy, and drove cattle across the trails until 1907, when cattle driving was less needed.

Charles Henry Turner was a zoologist and entomologist (bug scientist).

His research showed that insects could hear different pitches, and that honeybees could see in color!

Charles was the first African American to earn a Bachelor’s degree at the University of Chicago in 1891. In 1907, he earned a PhD in Zoology at the same university.

He loved teaching children about Entomology.

Welcome to the Team, Kevin! 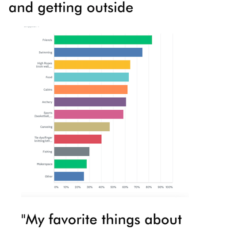 The Results Are In–2021 Camper Outcomes 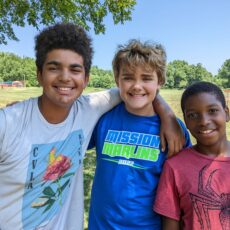 What Campers Gained This Summer